Things to do in Leigh on Sea

Once a busy fishing port, famed for its whitebait and shellfish, Leigh is an ideal spot for a day trip as it’s only 45 minutes on the train from central London or only 30 minutes from Barking. With its seaside pubs, cobbled streets and authentic cockle/seafood sheds, Leigh-on-Sea offers a traditional seaside town setting with some of the best fresh fish and seafood in the country. It’s also only a short distance from other popular seaside destinations in Southend if you fancy a waterfront wander along from neighbours Westcliff and Chalkwell. Read on for our guide to the top things to do in Leigh-on-Sea.

Where is Leigh-on-Sea? How far is it from Southend?

Leigh-on-Sea is a town in South Essex, on the coast of the Thames Estuary. It’s roughly an hour’s walk from Southend, heading west in the direction of London. If you’re not up for the walk, it’s an easy 8 minute train ride from Southend Central to Leigh-on-Sea station.

What is there to do in Leigh-on-Sea?

From Leigh-on-Sea station you can walk directly down the coastline and cobbled streets taking in the view of the estuary with it’s bobbing fishing boats. The cobbled street has an old fishing village charm, coupled with the bustle of modern life. On any sunny day the terraces of the local pubs will be overflowing with locals and visitors enjoying the sun, drinks and cockles. The Peterboat and The Mayflower are firm favourites, as is the Olde Smack (which was a type of fishing boat, don’t you know!). Away from the train station and up Leigh Hill, Leigh-on-Sea is home to The Broadway, a thriving main street with a plethora of restaurants and cafes (from fine dining to fab chip shops), but it’s also home to an increasing amount of boutique stores and art galleries. Find out our Leigh-on-Sea restaurant recommendations here.

Is there a sandy beach in Leigh-on-Sea?

Leigh-on-Sea is home to small and sandy Bell Wharf Beach, which is a 10 minute walk from the station. There are some charming pubs nearby as well as cockle sheds for the freshest of seafood.

Where can I find tide times for Leigh on Sea’s beach?

It’s definitely worth checking tide times in advance of your trip to the coast, to help you plan your day. You can find tide times for Bell Wharf beach here. 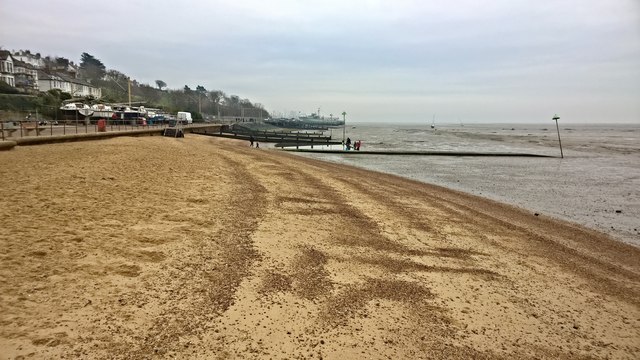 What’s the history of Leigh-on-Sea?

Leigh has been a fishing village since Medieval times. Rumour has it Leigh-on-Sea is also the place where the famous ship The Mayflower was built before it sailed off to North America in the 17th century. Formerly known as ‘Old Leigh’, or ‘The Old Town’, this once rich and important port on London’s shipping route boomed in settlements from sailors in the 18th century. It declined in the mid-19th century when the railway line from London to Southend started up. Now the modern day Leigh-on-Sea town has enjoyed vast regeneration, reinventing itself as a popular destination for socialising at bars, restaurants and cafes as well as offering niche gift shops, boutiques and galleries for people to enjoy. Rightmove has crowned Leigh-on-Sea as one of the happiest places to live in UK every year for the past couple of years.

Where can I experience art and culture in Leigh-on-Sea?

Thanks to its picturesque location on the coast, Leigh has become home to a thriving community of local and contemporary artists and designers. You’ll find lots of little galleries and workshops dotted around and every year the community gathers together for the Leigh Art Trail in early to mid June. The trail showcases work from over 60 different artists all around Leigh, some of it even showcased at Leigh-on-Sea station itself.

What festivals and events are there in Leigh-on-Sea?

On top of the Leigh Art Trail, Leigh-on-Sea is home to a number of events throughout the year. The Leigh Folk Festival towards the end of June is the most famous but the Leigh Regatta in September is also well worth a trip to the seaside for all sorts of sea-shanty shenanigans.

Where can I get fish and chips in Leigh on Sea?

Who can say no to fish and chips on a day out to the Great British seaside? There are a few options in Leigh-on-Sea. Close to the seafront there’s a good selection of pubs, including the Mayflower and the Peterboat, all of which serve hearty portions of fish and chips. Simply Seafood is a slightly more upmarket affair also close to the beach, where you can get all sorts of fresh fish and seafood as well as the classic dish. If you’re looking for a takeaway chippy, try Fish to Go, Fish Inn or The Perfect Plaice, which are all within half an hour’s walk of Leigh-on-Sea station.

What hotels are there in Leigh-on-Sea?

There are currently no open hotels in Leigh-on-Sea, so you’ll need to look slightly further afield in Westcliff or Southend for an extended stay. There are plenty of hotel options in Southend, from the Roslin Beach Hotel to cheaper B&Bs. 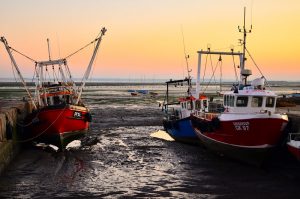 How to get to Leigh-on-Sea with c2c? How far is it from London?

Take the train from London Fenchurch Street which will go direct through to Leigh-on-Sea, and continues bound for Shoeburyness. The journey time from London is approximately 45 minutes. There are approximately 6-8 trains per hour on a weekday, depending on peak or off-peak travel time and train tickets bought more than three days in advance are £11.40. Whether you’re travelling in a group or have the kids with you, explore our great value ticket offers to make sure to get the best deal for you. Leigh-on-Sea station is a 10 mins walk from the Old Town and 15 minutes from the Broadway (which is uphill). To the east Chalkwell station is a lovely 15 minute walk along the waterfront.

The best restaurants in Leigh on Sea

Discover dining hotspots serving the freshest seafood and other produce.

Take a picnic to the romantic crumbling ruins of Hadleigh castle and enjoy stunning views of the coastline from up high.

As well being only a short distance from other popular Essex and seaside destinations, there are also several forests, woodlands and reserves nearby for some scenic strolls and wildlife spotting. Hadleigh park and Hadleigh castle, Belfairs Wood and Two Tree Island are of a worthy note in this area.

Visit Hadleigh Park for cycling, as well as plenty of other outdoor pursuits including kayaking and sailing. The park also boasts stunning flora and fauna, making it a great walking spot.

Two tree island offers views over to Hadleigh Castle and the Estuary – a lovely spot for a dog walk or nature ramble.