London is full of top bars and restaurants with a view, so we’ve compiled a list of the best rooftop bars closest to ours stations, bar none. Well, obviously not all of them, but this is a special selection picked for good vibes and great spaces near to our network. After all, they’re no good if you can’t get to them, right? Let us know if your favourite didn’t make the cut and we may reassess the list.

Of course, you’re going to be spoilt for choice in the city, but there are a couple of rooftop bars that are right on the station doorstep, with a few slightly further afield too that are all worth a visit. 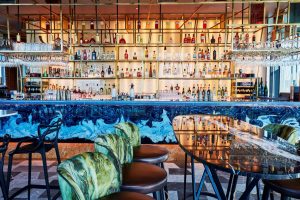 The self-titled ‘wildest rooftop bar’ in London, Savage Garden doesn’t confess to its sins; it embraces them. Described as a study in experimentation and temptation, this 12 storey high energetic bar has amazing views over the city, theatrical cocktails and food to die for. Savage Garden London encourages all of its patrons to ‘take a walk on the wild side’. 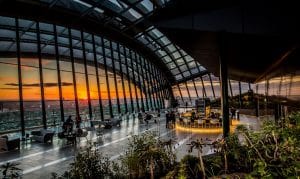 Sitting atop the ‘Walkie-Talkie’ building is this fun and lively drinking destination. Look out across London and over the Thames towards The Shard, immersing yourself in the sky high garden, photosynthetic decor and live music performances to boot. The dress code is smart casual, so make a proper evening of it. 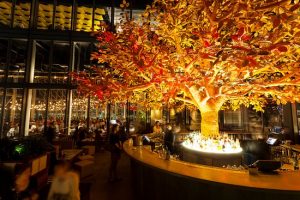 Typically when you think of fusion-food, you don’t think of Japanese, Brazilian and Peruvian cuisines. But Sushisamba did, and they obviously got something right. This bar/restaurant spans both the 38th and 39th floors of the Heron Tower, dons the highest outdoors dining terraces in Europe, has a 360 view of the capital and has a giant orange tree in the middle of the room. There’s a reason it’s so popular. 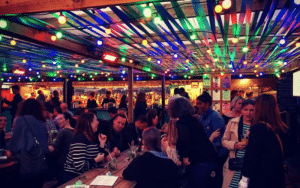 One of the more up and coming drinking destinations on the list; Bar Elba takes its inspiration from a small Mediterranean island called ‘Elba’. Supposedly, Napoleon (yeah, the Napoleon) was exiled there for 300 days with no more than a few friends, his horse and a lot of booze. Bar Elba aims to bring that party island vibe to a London rooftop, whilst offering an exciting and bouncing atmosphere. Unfortunately, horses aren’t welcome here. 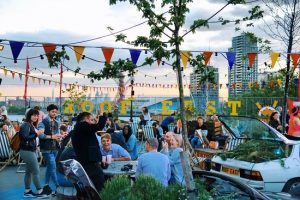 Probably the most versatile drinking spot on the list; Roof East has a bar, but has also seen a crazy golf course, a roller rink and an open air cinema. You get the idea. This quirky but brilliant community space brings people together to enjoy themselves and try new things. The views over the Olympic Park are particularly great on a sunny, blue-skied day. 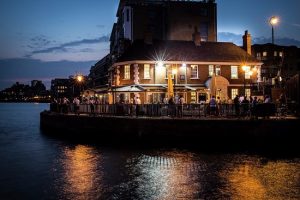 Okay, so this one isn’t technically a rooftop bar. But it does have a huge panoramic terrace that overlooks the Thames. It’s also a Gordon Ramsay owned restaurant (but without the Michelin star prices) which gives it that extra sprinkle of esteem. When the weather’s nice it has an open air BBQ that really livens up the atmosphere, and for that final dash of something extra special, kids eat for free all day, every day.

You can buy your c2c train tickets via our new ticketing system here.