c2c | Destinations & offers | 2FOR1 | Wonders of Civilisation: A Crash Course in Archaeology at the British Museum 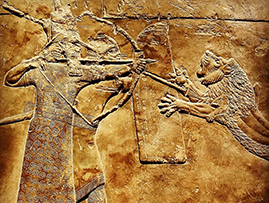 Wonders of Civilisation: A Crash Course in Archaeology at the British Museum

** THIS LOCATION IS CLOSED UNTIL FURTHER NOTICE **

Follow in the footsteps of the great archaeologists, relic hunters and explorers who acquired the treasures of the British Museum and learn about their adventures and the hazards they braved to make their astounding discoveries.

You’ll unlock the secrets of the British Museum’s extraordinary collection with a qualified archaeologist, tracing humanity’s journey from the Stone Age to the modern age. You’ll follow the history of human civilisation, from our earliest origins in Africa, to the great empires of Egypt, Assyria, Greece and Rome. Along the way, you’ll tour the British Museum’s most famous galleries, including Ancient Egypt and Assyria, Ancient Greece and Rome, the Vikings and the Aztecs, discovering world-famous artefacts such as the Rosetta Stone, the Parthenon Marbles and the Lewis Chessmen.

You’ll also have some fun learning to play one of the world’s most ancient board games, The Royal Game of Ur, whose rules were deciphered by British Museum scholars.

After lunch you’ll get down to finding out how we know what we know. You’ll hear about the geniuses who decoded ancient languages such as Egyptian hieroglyphs and Sumerian cuneiform, the world’s earliest written language. You’ll learn the basics of these writing systems and try your hand at writing your name in Egyptian hieroglyphs. You’ll then get to grips with the science behind archaeology, finding out how ancient objects are dated, how ancient sites come to be buried in the first place.

** THIS LOCATION IS CLOSED UNTIL FURTHER NOTICE **

** Before you book your ticket, check the full Days Out Guide travel advice here ** *Advanced booking required by clicking ‘Buy Online’. Please use code ‘2FOR1’***All bookings ’Subject to availability’** The…

**Before you book your ticket, check the full Days Out Guide travel advice here** Boarding commences 15 minutes prior to departure. Sail off into the evening while the rest of the…

**Before you book your ticket, check the full Days Out Guide travel advice here** Why not see the best views in London while you tuck into tea, scones and all…