We are very sorry for the delays and cancellations to your journey between Friday 18 and Monday 21 February. The impacts to your journey were as a result of Storm Eunice and Storm Franklin, which affected large parts of the UK between Friday 18 and Monday 21 February. This document provides more information on what happened over these four days, the challenges we faced as a railway, and how we managed the situation.

If you were delayed you can submit a claim for compensation. Please see below for more details about how to claim the money you are owed.

On Thursday, the c2c team were made aware by Network Rail that to mitigate the impacts of Storm Eunice, they were imposing speed restrictions across the whole c2c route, which meant trains could only operate at a maximum speed of 50mph. A consequence of this action was the number of trains we normally operate during the peak periods, needed to be reduced for the safety of our staff and customers.

By mid-morning, the strong winds had caused a number of issues including:

By around 11:30hrs the wind had blown a number of objects onto the line, including a tent at West Ham, plastic in the overhead lines at Barking and a tree on the line at Benfleet 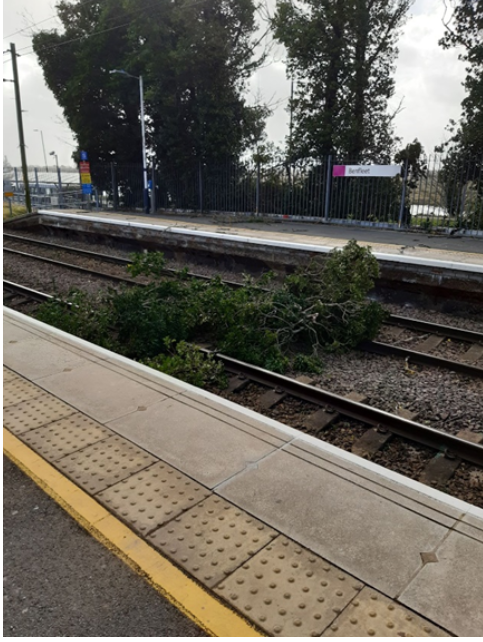 Tree on the line at Benfleet Station 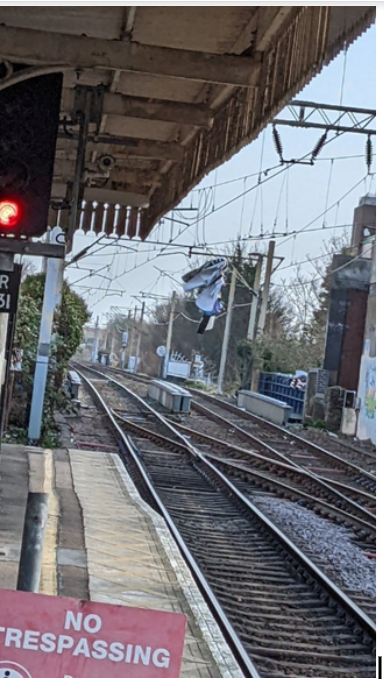 Banner caught in overhead lines at Southend Picture from @AntonyWithNoH

At this point, in order to remove the objects safely and restore power, the c2c team, in discussion with Network Rail, took the difficult decision to pause all train services at the nearest station, in order for our Network Rail colleagues to carry out the necessary repairs.

As the winds continued to strengthen, around 14:00hrs, the team were also dealing with new problems such as a further tree on the line at Elm Park and a loss of power in the Benfleet and Pitsea area.

Network Rail engineers were incredibly stretched not only removing obstructions off the railway and restoring power across the c2c network, but dealing with similar issues with all train operators across the UK.

The Network Rail and c2c teams worked throughout the afternoon to restore power and remove the obstructions so by early evening on Friday, we were able to run a limited service for customers until the end of service.

Over the weekend the continued high winds meant the speed restriction remained in force and objects such as trampolines, plastic rubbish, trees and other loose objects continued to be blown onto the railway, disrupting services. 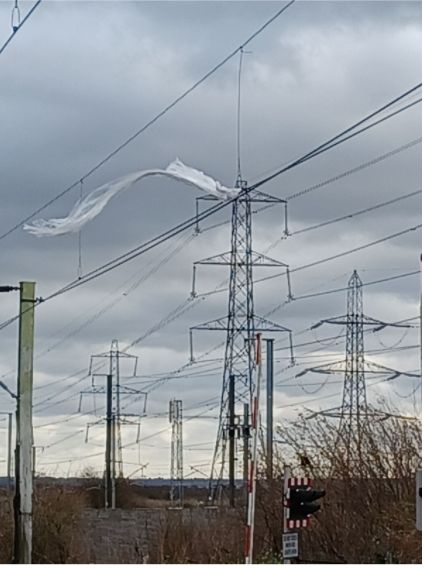 Monday 21 February, Storm Franklin hit the UK and the Network Rail speed restrictions were maintained, necessitating the planned removal of a number of trains from our AM and PM peak service. Services throughout much of the working day were disrupted/ delayed due to the issues the wind was causing.

By the afternoon, the weather forecast predicted the winds would be dying down, and speed restrictions could be removed. In anticipation, we were able to reschedule the planned peak services that had been cancelled earlier in the day and services in the PM peak of Monday 21 February were running with minor delays.

What was the impact, and what did we do about it?

The impact of the four days of stormy weather had a significant impact on our customers who were either unable to travel, or faced delays and cancellations at short notice.

Suspending all services is a rare occurrence and not something we do lightly, as we appreciate our customers rely on us. However, in these circumstances it was unsafe to continue running trains with obstructions continuing to fall onto the railway.

Once the situation was clear, the best solution, under these circumstances, was to temporarily suspend services, the team set about fixing the issues, and getting trains, drivers and station staff back into position to restart the service once it was safe to do so.

Following an industry wide call on Thursday 17 February, a decision was made in coordination with other train operators that our message to customers would be ‘Do Not Travel’, following a red alert from the Met Office. This message was shared on our website and via social media (as well as being picked up by National Media) so customers largely stayed at home on Friday.

The information was also briefed to our station staff so they could communicate this to customers who arrived at the station on Friday.

Over the weekend the c2c continued to update our website and social media to ensure the latest travel information was being shared and to recommend customers check before they travel.

If you were delayed you will be eligible for compensation for your journey. Find out more about the compensation we offer, and how to claim, here.