Today we have launched a new exemption badge for customers who are unable to wear face coverings.

People with conditions such as severe asthma and those with visible and non-visible disabilities that rule out the wearing of face coverings will be given badges, similar to c2c’s popular Baby on-Board badge scheme for pregnant women, which they can wear when travelling with c2c. 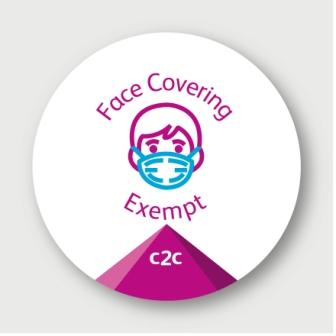 c2c Managing Director Julian Drury said: “We have launched this new exemption badge to support those customers who are unable to wear a face covering. We know some people may feel more comfortable wearing something that says they are exempt from this rule and also allows our staff as well as the British Transport Police to know who should and shouldn’t be wearing a face covering.”

Since 15 June, face coverings have been mandatory on public transport in England following changes to government guidelines. However, some groups are exempt from the rule, including children under the age of 11, people with disabilities or breathing problems and anyone travelling with someone who lip-reads.

Anyone who is unable to use a face covering because of a visible or non-visible illness or disability, as defined by the 2010 Equality Act, are also exempt, as well as c2c staff, on-duty police officers and emergency services employees. Customers can be fined £100 by the British Transport Police if they travel without a face covering.

The badges can be collected at all c2c stations or applied through the website here: www.c2c-online.co.uk/help-feedback/passenger-assist/face-covering-exemption-badges/