Barking goes back to the future

Thanks to the Railway Heritage Trust, this April we are beginning work to restore the front of Barking station to its former 1960s glory.

Barking Station is a Grade II listed building, which boasts being one of the only listed mid 20th Century station building from the 1960s within the whole of London. It was built in 1959 to the designs of H.H. Powell, the chief architect of the Eastern Region of the British Railways Company, with John Ward as project architect and C.R.Price as the general contractors.

The primary significance of the building lies in the modernist design of the structure, which is best reflected in the street facing elevation. It was conceived as a bold, double-height structure supported by 22ft high concrete columns set over fourteen glazed bays, with pre-stressed concrete beams cranked to create a ‘zig-zag’ roof profile and flying canopy over the station forecourt. The concept was to provide a light, airy concourse with views of the exposed structure. It was considered an icon of modern railway design within the architectural press. See the 1960’s photo below: 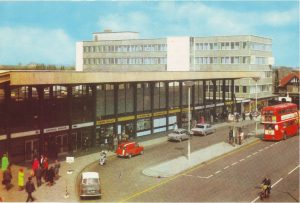 The refurbish of the the heritage façade of Barking station includes cleaning the glazing and original concrete and removing the internal retail units adjacent to the front. These works will also open up the façade to restore the original features. This is part of a larger scheme to create a new ticket hall fit for the 21st century (as per the visualisation below): 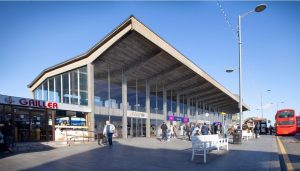 H.H. Powel, the architect of the original station, at the time became responsible for designing several stations in connection with the Eastern Region’s program of electrification in the late 1950s and 1960s. Aside from Barking Booking Office some of his best examples include Harlow Town Station (1960) and Broxbourne Station (1959-61) both of which are also Grade II Listed.

Thank you for bearing with us while the renovation takes place.