c2c | About c2c | We are c2c | Meet the Marathon Marshal Volunteers

During the London Marathon, 39,000 exhausted and elated runners will collect a large, shiny medal and a packed goodie bag from the team of volunteers stationed along the finish line. We met two drivers who will be part of that team.

The truly iconic finishing line, set against the backdrop of Buckingham Palace along the famous red route of The Mall will be home for the day to around 2,000 volunteer marshals, who will be in place to hand finishing packs to those who cross the line. The first home on the day, the Mini Marathon, will see young people start sprinting home as early as 8.55am. Once they’re home it’s the turn of the wheelchair race and then the pro’s. By the time the thousands of runners at the mass start set off at 10am, the volunteer marshals will have been working for two hours and handed out thousands of bags already!

Among those 2,000 volunteers along the finish line this year are two c2c train drivers – and running enthusiasts, Carole White and Samantha Shepherd. The friends, both based at Shoebury Depot are a regular sight around the network, as they head to and from training runs or events. Carole, who started out as a Guard at c2c and worked her way up, has been a driver for 16 years and Samantha for 13. They love their jobs and the freedom they have to enjoy their own running around that.

“The great thing about running is that you can do it anytime you want to do it, so it fits around the work hours perfectly” Carole tells me. “It’s the perfect sport for train drivers, as it’s so flexible”. On the trickier aspect of managing her shifts (and those 3am starts) she adds, “I find running gives me more energy – and you don’t get so tired”.

Having once been training partners, Samantha and Carole rarely train together now due to their (train) schedules (sorry, we had to do it!) but they do try and get to events together. Just recently they completed the Hampton Court Marathon together and they’re signed up for the Berlin Marathon later this year. 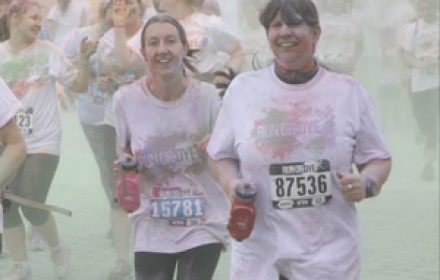 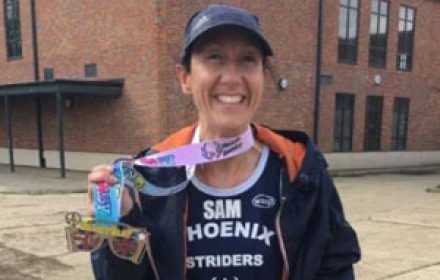 They’ve come a long way since they started running, Carol tells us, “I entered a run in London and Sam was saying she could never do it, she’d never run… Then she just signed up for the same race as me! She just told me one day. So we got running”. Their first race was a fun race, called the Run or Dye, where runners run in white tee-shirts through coloured powder to create patterns and clouds of colour. “That was just two and a half years ago” she adds.

Now, they both regularly volunteer for their local Parkrun, where this year Carole was awarded the Volunteer of the Year Award for her commitment to marshalling. That’s no mean feat taking into consideration that Parkruns take place every Saturday mornings, which don’t work well with driver’s rotas! Aside from negotiating schedules, running has given them both a great social life outside of the demands of c2c. Carole said, “We started going to park run; we met a few people there. Then we joined a running club. So we have a great network now – a really wide range of friends now which is nice’.

On Sunday they and their running club will be making its way to London along the c2c mainline to the marathon – on the 6.10 from Shoebury to London. The duo volunteered to be marshals this year after being unsuccessful at getting a running place. “We got to know about being able to volunteer through the local running clubs” Carole told us. “ We were on the waiting list for Poplar and then we got offered a role on The Mall, giving out the finisher bags! We couldn’t believe it really”.

So, instead of crossing it themselves, Carole and Samantha will be handing over medals to friends as they cross the line this weekend. They’re particularly excited for friend Judy Burston, one of the founding members of their local running club, the Phoenix Striders. Now 80 years old, Judy will be completing the marathon in a time most people half her age would be delighted with. “It’s great for us all to be there to support her”, Carole said.

If you’re running this Sunday, good luck! Keep a look out for the ladies at the finish line cheering you on! Don’t forget – all runners get free train travel along the route this Sunday (don’t forget your race number!)

If you live along the line, they’ll be back on the trains on Monday. So if you see them out training this summer give them some support! 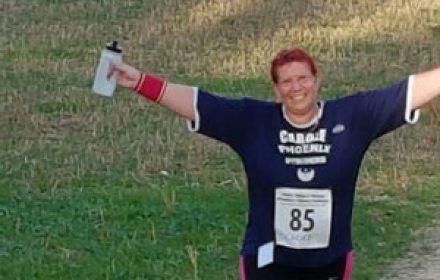 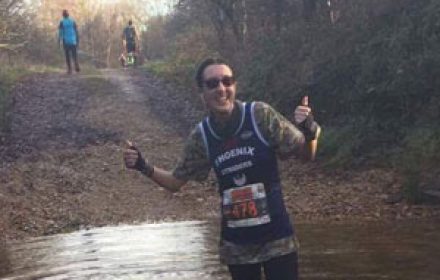