Great options for commuters along our route, from Barking to Southend

Looking for somewhere affordable to live that doesn’t involve hours travelling on the train? Move east out of the capital to find cheaper accommodation, a commute that’s under an hour, and some of the cheapest train fares in the South East of England. You’ll also get an award-winning punctual and reliable train service with free on-board WiFi, modern air conditioned trains, and great connections into the city. Living on our route offers real value for money.

The housing on our route is some of the best value anywhere in London and the South East. With property hotspots around Barking, Basildon, Purfleet and Southend, you’ll find plenty of affordable places to live, and many of the towns are on the up. 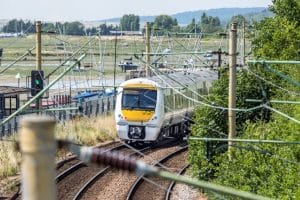 We have some of the cheapest commuting fares mile for mile of anywhere in the South East of England. For example, an Annual Season Ticket from Basildon to London is £2940 with us, compared to £3816 to London from Wickford with Greater Anglia.

c2c has been mentioned in several articles about the best commuter towns close to London based on research by independent surveys looking at both the affordability of commuting and housing. Southend, Grays and Basildon have all ranked in the top 10 in the last two years.

The borough of Barking and Dagenham is definitely on the up, with a big housing project at Barking Riverside and a new town centre in development.

On the north shore of the Thames, Thurrock offers affordable rent, great shopping centres, heritage sites, and acres of countryside.

Living in and around Basildon

Basildon is an ideal commuter base where can find top sports and leisure facilities, a decent high street, and plenty of green spaces on the doorstep.

Living in Southend and the along the South Essex coast

Enjoy a coastal lifestyle with the ease of excellent train links into the city. Recent regeneration has created a variety of desirable locations to live.

Our London terminus, Fenchurch Street Station, is less than 5 minutes walk from The Gherkin and Tower Hill and less than 15 minutes walk from Liverpool Street Station. The line runs out east through South Essex, along the Thames estuary and has linked the coast to the capital since the first line was built in the 1850s. Along our route you can find a variety of affordable housing in some great locations.